After much tossing and turning, I finally fell asleep last night at 3am.  When I woke up it was already 12 noon.  I must have been super exhausted.  Realizing that I already lost the morning, I headed out for Torvehallerne.  It’s one of the biggest markets in Copenhagen featuring the best meat cuts, fresh fish, and small food stalls for people to eat in at the bars or take out.  The market looks very posh and so Danish.  The whole building is class to allow for ample amount of sunlight in and allows those outside to see all the happenings inside the market. 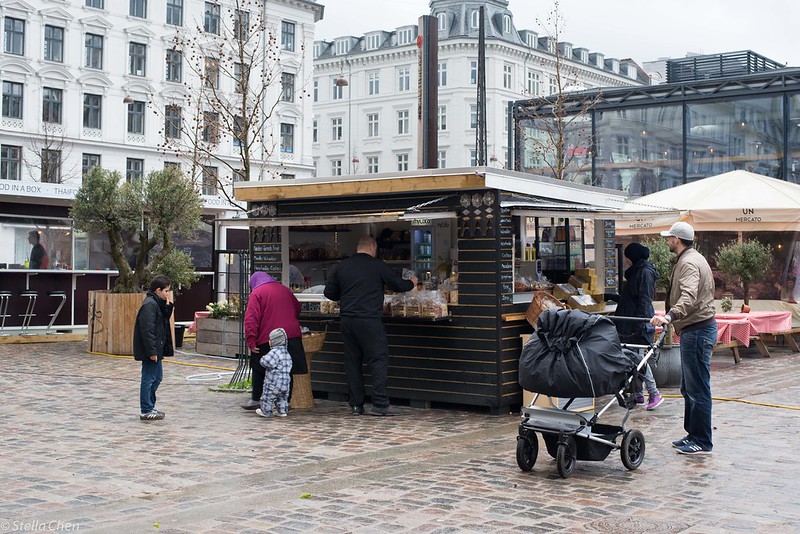 There’s definitely something for everyone.  Cheese shop… 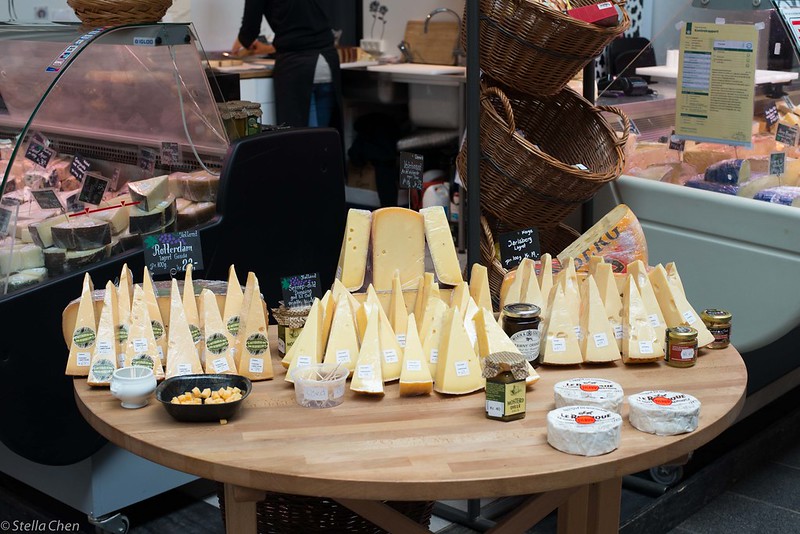 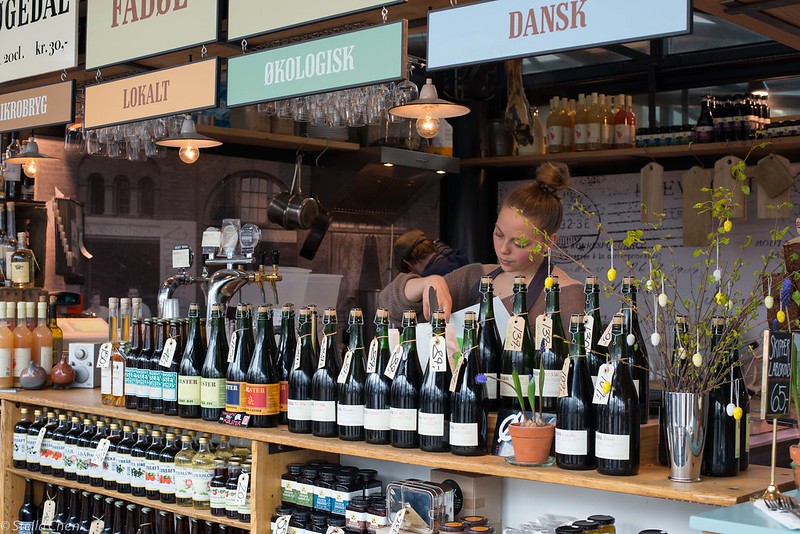 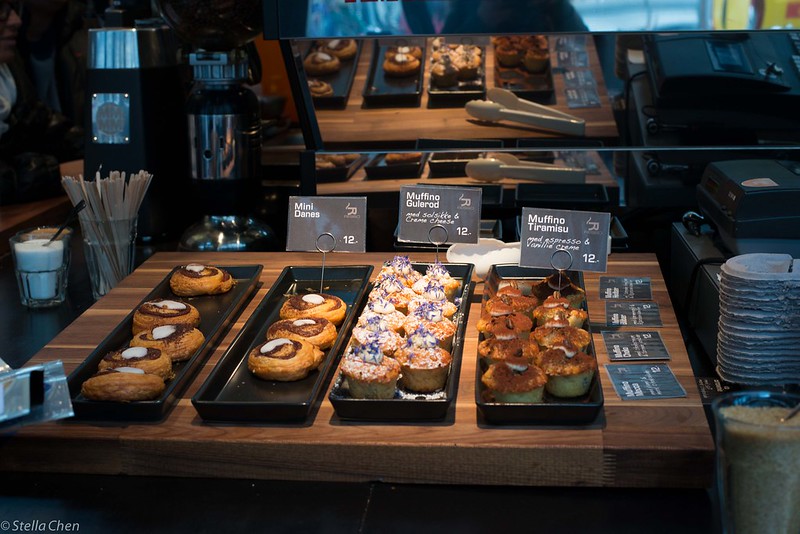 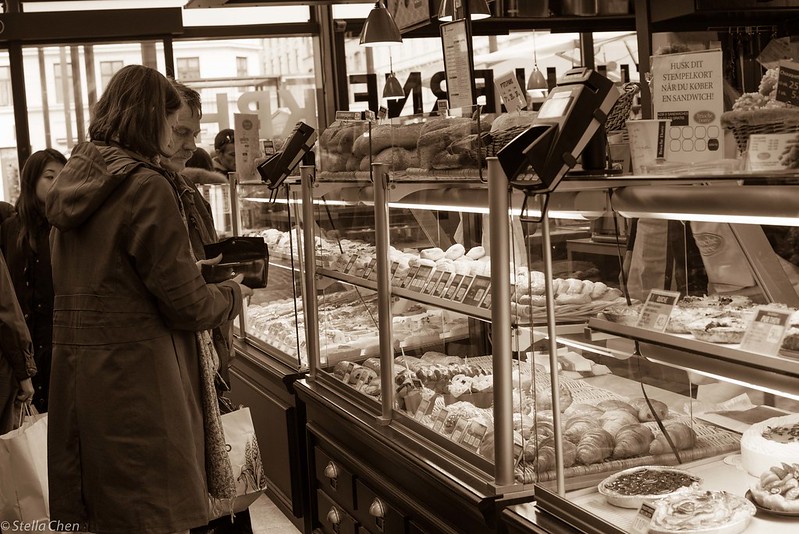 An abundance of fresh vegetables. Perfectly arranged, grown in a nice shape. The Danes approve. 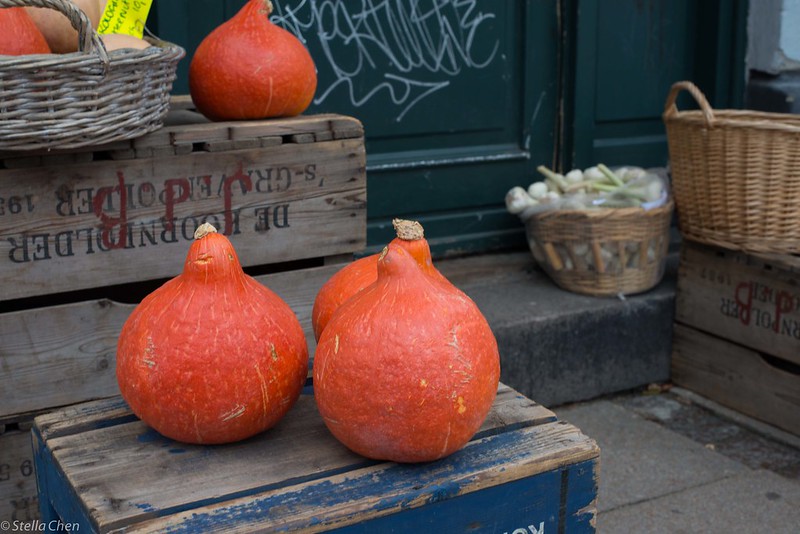 Here, I also had my first Mikkeller beer. And let me tell you, it’s so good!! SO GOOD! They were recently featured in the NY Times.  I’m not a big beer drinker, but boy did the beer go down easily with a smoked salmon asparagus smorrebord.  I’m going to make sure I have a few more pints of Mikkeller before I go home. 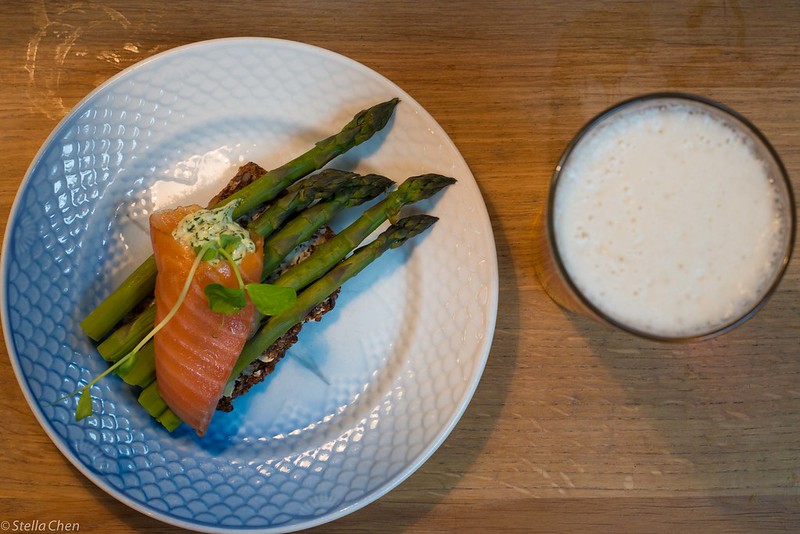 And if only I had more room in my tummy.. 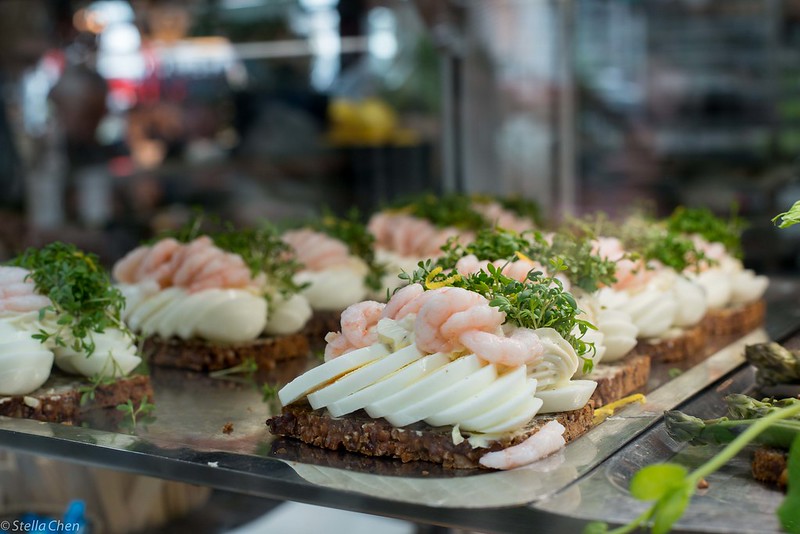 I also tried an avocado, citrus, ginger juice from the juice bar. Their tag line? Look good naked! (So Danish) Great message, hits home, sticks with you. Bravo once again to the Danes. 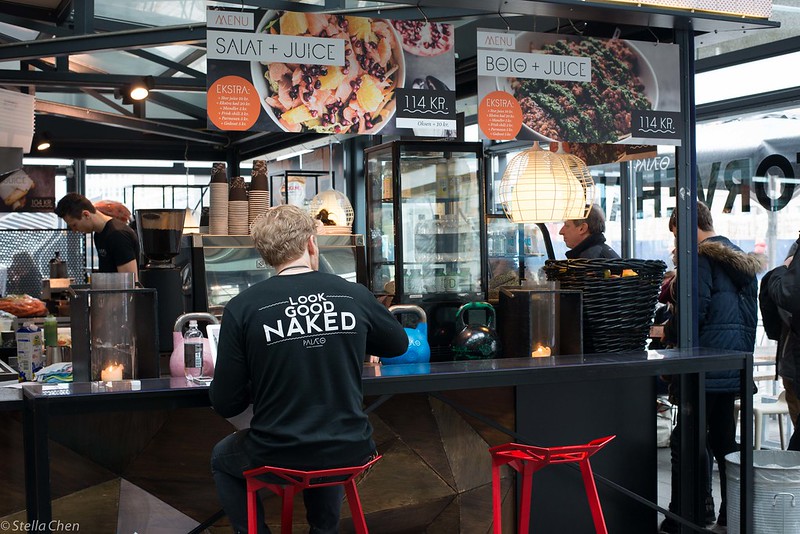 ..and as for my juice? Delicious!! You can barely taste the avocado, but the consistency is there. You can taste the ginger, and citrus. 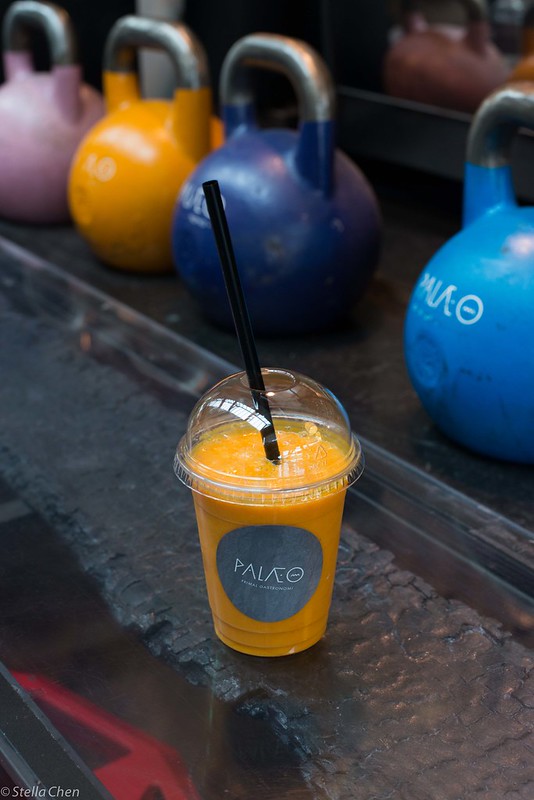 And as always, there is a focus on relaxing, comfort and enjoying life. Like these girls.. 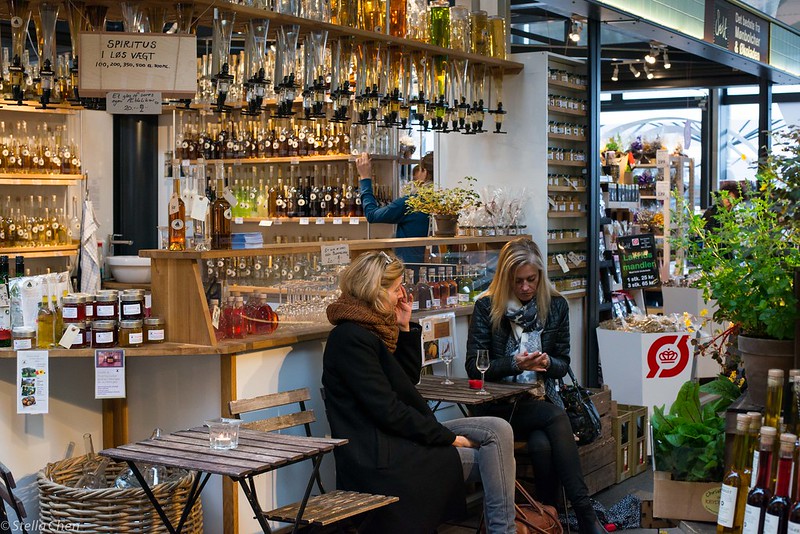 And this couple, stealing a kiss behind the lemon tree. 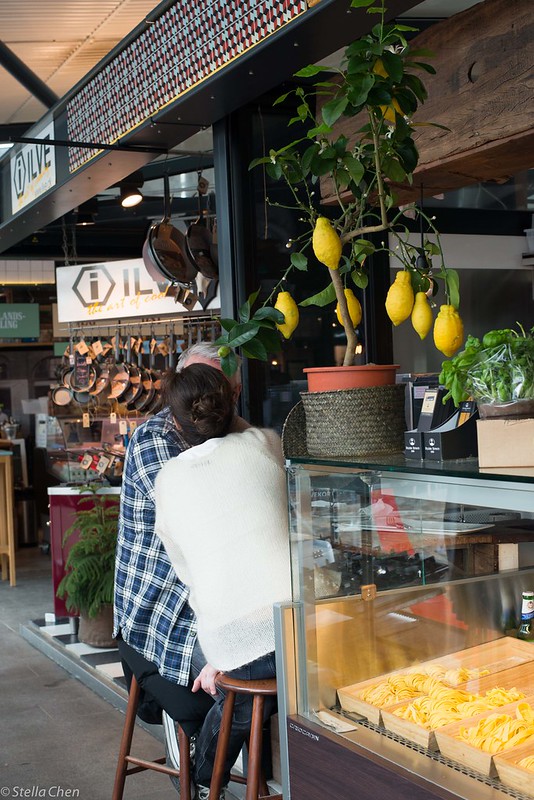 After an exhausting long day of recruiting events at UofT, Ru and I decided head to little Italy to unwind.  We went back to our faithful Yelp and Urbanspoon reviews.  Darwin caught our attention.  It’s a new french bistro with high ratings.  We thought we would give it a go.

We walked in and found a nice seat right at the front of the windows so we could people watch.  The atmosphere is nice, love the lighting.. very romantic.. which was perfect for the occasion anyways.

We were greeted by a really nice waitress.  What made her superb was, just as I sat down, she informed us that the wine for tonight was a 2010 Sussreserve Riesling VQA from Angels Gate for $6 a glass.  I have never heard of Angels Gate before.  She said it’s a vineyard in Ontario and that Darwin usually don’t like to stock wine that is available at the LCBO.  So you won’t be able to find this one at the LCBO.  Another bonus!  I love trying out new wines.  She grabbed us the bottle and gave us some for tasting.  Without hesitation, we both ordered a glass to start.  More about the wine later…

After a few sips, we dove right into the menu.  Short and sweet there were 6 appetizer and 7 mains to choose from.  Even Ru, who is normally indecisive was able to decide quickly.

I started with the avocado shrimp cocktail.   It had mangoes and coriander.  The avocado and mango combination was really new and interesting.  The flavour together tasted new and curious.  There was a bit of pepper in the avocado which gave it a bit of a kick.  The shrimp was perfectly grilled.  Lightly charred, crispy on the outside, but still juicy on the inside.  Hands down to perfectly cooked shrimp.  There was a bit of lime juice on the shrimp which brings out the freshness.  Overall, excellent dish.  I was impressed.

Ru ordered the calamari on Ratatouille.  The waitress came back and said that it was no longer available. The chef offered to prepare an octopus on hummus dish instead -Ru gladly accepted.  The octopus was perfectly grilled too.  Lightly charred on the outside which made it taste crispy, but the inside was really juicy and fresh.  The hummus had a bit of turmeric in it which gave it the spicy flavour.  The night was already looking very good with 2 appetizer that impressed.

For the main I had the roast salmon on tabouli.  There was eggplant, bell pepper, tomato caviar, pine nuts in the tabouli.  The salmon tasted fresh, but to my standard it was slightly overcooked which made it a bit too dry.  The homemade tzatsiki sauce was excellent, you could taste the fresh cream.  I never had tabouli before.  It tasted like couscous.  It was pan fried so it tasted a bit crunchy and went well with the pine nut, egg plant and bell pepper.

Ru ordered the braised pork belly on madras rice.  The braised  pork belly and perfectly cooked.  It was lightly seared to a point where it was a bit crunchy on the outside, which sealed the juiciness on the inside.  I am not a pork fan, Ru described the cut of the pork belly as perfect.  Something along the lines of the perfect balance of layers of fat and meat.  The sauce tasted a bit sweet with a hint of raspberry and lime.  More impressive than the pork belly was actually the mushroom.  The mushroom was delicious.  I love mushrooms and this was by far the best I’ve had.

Mid way through the main, we ordered another glass of the  2010 Sussreserve Riesling VQA.  The Riesling was on the sweet side.  It was very fruity but not overbearing and sticky to your mouth.  Because of the hints of pineapple and nectarine taste, it went really well with the seafood in our appetizer and my main.  I’ve never heard of Angels Gate before, but it’s definitely caught my attention now.

We were already really satisfied by the end of our main.  The waitress came by and pick up our dishes and returned with 2 palate cleansers.  It was something… something… with a hint of lime.  Pleasantly surprised we took a sip.  Silence.. and finally Ru was like.. there’s liquor in here.  How awesome!  The waitress decided that after having 2 glasses of wine each, we needed a shot of liquor to get us through dessert.  Service like that deserves an A+!

Up for dessert was creme burlee for me.  The falvour and everything tasted like how a creme brulee should be, but the texture was different.  The texture was very fluffy and airy, it was light.  Perfect after such a heavy meal.

Ru opted for the parfait.  Homemade whipped cream and sour cream with fruit bottom.  Delicious and a perfect way to end a good meal.

After such an awesome meal and a few drinks we got very chatty with the waitress.  She told us that this restaurant is new and the chef is super creative.  We told her that we would be very interested in coming back and just having the chef cook and surprise us.  She was so excited and said that the chef would love that idea.  She also invited us to an event that they will be having a few weeks from now on a Friday night.  They are going to launch their bar menu and told us to come have a few drinks and try out all the bar food.  Overall we were beyond happy with the food, the drinks, the service, and best of all it didn’t cost an arm and a leg.  The appetizer, main and dessert was price fixe of $25 per person and the wine was $6 per glass-we really scored!